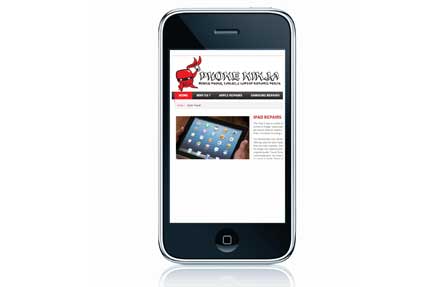 As one of the very few trustworthy repair specialists in Perth Western Australia we offer a extensive range of iPhone 3Gs services. To deliver on this promise is why we offer our Perth WA price-beat guarantee and often same day turnaround. Our Ninjas are waiting with zen-like patience so drop in for a chat, or call the Ninja team now.

The Ninja team are now servicing our Perth West Australia clients for all their repair needs. Whether you are looking for a simple iPhone touch screen replacement or repair of a more complex problem like water damage our Ninja technicians have the training and knowledge required to assist you so contact us for more information.

An iPhone screen fix is the most common 3GS repair we perform. Thankfully though it’s quick and easy to replace, and easily diagnosable by a smashed glass screen. Quite often when a 3Gs screen replacement is required, the touch screen will not work at all. In some other cases however, the digitiser will still work fine, but will exhibit a tell-tale sign like smashed glass. iPhone replacement glass jobs are often done on-the-spot in Perth WA so head down to our shops for a chat or call to see if we can fit you in today!

When a 3GS is dropped or defective sometimes the mobile will display in white; this often means the iPhone 3G requires a replacement LCD. Other symptoms include dull output, dead pixels, lines in the display, or muddled output. Sadly in some cases the LCD Panel and the iPhone 3Gs digitizer will both need replacing. You may fit into this basket if you have a smashed iPhone touch screen and have any of the symptoms listed above. Luckily however we offer excellent discounts when both the Touch and LCD 3Gs are replaced together.

A common iPhone fix for any respectable iPhone repair shop is a battery replacement. The most common symptom is a short battery life; sometimes even lasting only a few hours. Sometimes it’s so bad that as soon as the mobile is removed from the charger the gadget will turn straight off. Bad iPhone 3Gs batteries can also cause the mobile to not charge or no longer turn on; though these symptoms can also point towards requiring a Charger Port Replacement, Power Switch Flex Cable Replacement or a more worrying logic board issue.

Another common repair we perform is a Home Button replacement. Often the button can look overly depressed before eventually it just stops functioning altogether or becomes intermittent. This is once again a simple fix, but can require the entire digitiser frame assembly to be replaced. We also can do housing replacements if your’s is overly damaged.

The 3Gs has a host of other buttons that can be damaged from physical knocks or from wear & tear. These include the mute, volume, and the power / sleep button. Results mean you can lose control of the sound or even worse, the iPhone wont turn on. All these buttons are on the same flex cable so it’s a simple matter of swapping out the part in most circumstances. When a iPhone wont power up the issue can also point to a faulty logic board, though a bad battery or charger port as referenced above is more likely.

Dropped your iPhone 3G in water lately? Don’t worry our Ninjas have been training hard just to help you. To increase the chance of repair; make sure you turn the gadget off. Gently dab the device with a towel. At this point please bring down your 3Gs for repair; we’ll dissemble, clean, check for corrosion, and make sure all the parts are working. The most common components ruined by water damage are the battery or the LCD panel so drop down to our stores in Perth West Australia for more info.

While most iPhone damage is generally related to issues like smashed touch screens, there are still other less common problems which plague Apple’s gadgets. These include microphone issues, speaker malfunctions, pesky software issues including iTunes error codes and recovery loops, SIM card reading dilemmas, and much more. However whatever your issue, your Ninja team is here to help.

The 3Gs iPhone launched on June 19, 2009 packed a more powerful 600mhz ARM Cortex A8 processor with 256MB of DRAM Memory. Apple’s gadget added the first officially-supported video camera (30fps VGA previously a feature only jailbroken mobiles possessed) as well as a 3 megapixel still camera. With the exception of the faster processor however, the 3Gs was visually and in terms of software identical to the 3G with only the addition of the Compass app. The 3Gs was available in 8GB, 16GB and even a 32GB models.